By Amy Thomas in Thought Leadership, Community Posted May 15, 2018

As commencement speaker last week to the 2018 graduating class from the Leeds School of Business at the University of Colorado Boulder, KeyCorp Chairman and CEO Beth Mooney started her address by explaining to graduates the importance of focusing as much on the "how" as the "what" needed to achieve a successful career.

Mooney, the 2017 Banker of the Year, explained that as important as discovering what each student would do to achieve success in their career, it was equally important to focus on how that success is achieved. One’s ability to treat others with respect and be a team player are just as important as hard work, she told the group of more than 800 graduates, CU faculty and staff, and graduates' family and friends attending the May 11 undergraduate ceremony at the Coors Events Center. Both Key Equipment Finance and KeyBank are longtime partners and supporters of the Leeds School of Business through multiyear grants and support for diversity, mentorship and internship programs. 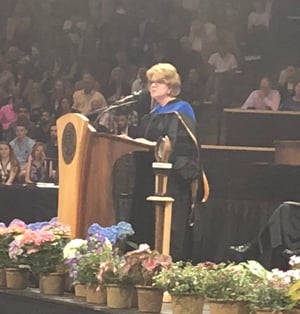 Even though Mooney gives on average three to five speeches a week to a variety of audiences inside and outside of Key, she admitted it was a humbling and somewhat intimidating experience preparing for this particular keynote address. She wanted to ensure that her message would resonate with graduates just embarking on their careers.

Mooney went on to talk about Steve Jobs’ nontraditional path to success, including some setbacks which ultimately taught him valuable lessons. But perhaps the most inspiring segment of the commencement address was when Mooney shared her own personal story.

After graduating Summa Cum Laude and Phi Beta Kappa from college, time and again, the number one qualification of the men who interviewed her was: “How fast can you type?” Ultimately, Mooney took a job as a secretary in a bank, and after learning a bit about banking, found that it interested her. She then set out on a path to be included in a banker training program but found those doors closed to her. Not one to give up, she secured a meeting with a bank manager and, as she describes it, badgered him into giving her a shot. That manager not only gave her a shot but also became a mentor who convinced Mooney to pursue her MBA. 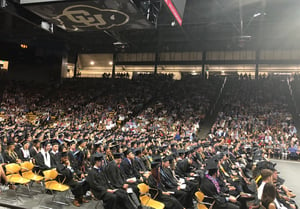 Her subsequent banking career has been exceptional. Eight years ago, when she was named the first female CEO of a top 20 bank, she called that former manager to thank him for his guidance and support.

The audience was engaged and interested in Mooney’s story. In fact, when she mentioned that her own vision for her career is that her notoriety as the first female CEO will be a footnote, not the headline, of her career, the audience burst into applause.

Lori Frasier, senior vice president, strategy and performance management for Key Equipment Finance, was one of the employees who heard Mooney's address. "As a female leader at Key, I am so proud to say that I work for a company like Key and for a CEO as impressive as Beth Mooney," she said. "Her drive, authenticity and commitment to clients, employees and community inspires me. Today was another great day to be at Key."