Joe Messineo always had been fascinated and inspired by the stories of brave servicemen and women who put their lives on the line. 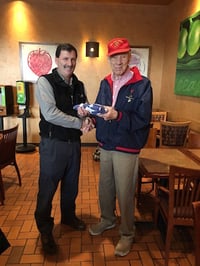 A decision to capture history

He wanted to help preserve them, and with assistance from his wife, Anne, a court reporter, and a friend, Mark Whalen, who produces video depositions for lawyers, Messineo began creating videotaped, first-hand accounts from soldiers who fought from World War II through present conflicts.

The interviews, in digital and written form, are filed with the U.S. Library of Congress as part of an oral history project launched through an act of Congress in 2000 aimed at collecting and archiving veterans accounts that might otherwise become lost or go unrecorded.

To date, Messineo has interviewed more than 20 veterans since becoming involved in what’s known as the Library of Congress Veterans History Project (VHP), involvement that began when he learned Anne was transcribing interviews for the VHP effort.

The Messineos asked Whalen to help. He handles videography, Anne Messineo produces the written transcripts and Joe Messineo conducts the interviews (photo above).

“I decided we should conduct these veteran interviews in Central New York since many of these people live within an hour of Central New York and are in our midst, and I really don’t want the stories to die,” says Messineo. “I’ve interviewed a man who liberated Dachau. I’ve interviewed a man who was on the beach at Iwo Jima, a PT boat crewman, radar operators, and I’m going to be interviewing a priest who was the personal bodyguard for the chief prosecutor at the Nuremberg Trials.”

One of Messineo’s early interviews, a poignant account of a World War II veteran’s experience fighting in five battles in the war’s Pacific Theater, was the subject of a May 2015 article appearing on Syracuse.com. 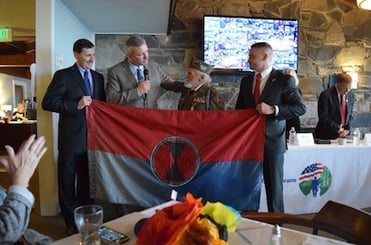 In the interview, Syracuse resident Donald Fida, a then-91-year-old member of the 184th Infantry Regiment of the 7th Infantry Division, describes in detail for the first time his capture and near-death experience during the invasion of Kwajalein Atoll in the Marshall Islands (photo right).

Messineo was so moved by Fida’s account that he sent a copy of the interview to Maj. Gen. Thomas S. James, Jr., current commanding officer of the 7th Infantry Division. James sent a lengthy, touching reply, thanking Fida for his service and presenting him with a 7th Infantry Division flag that had flown over Afghanistan.

In December, Messineo’s work was the subject of another article, this one appearing online in the Journal of Court Reporting (JCR), which latched onto the story through Anne Messineo’s involvement.

Joe Messineo explained to JCR.com that he was drawn to the project because of the need to preserve an element that’s typically missing from historical records.

“The authenticity of a first-hand account is priceless,” Messineo told JCR.com. “The video reveals the intense emotion that is drawn from a participant who is reliving the most poignant part of their past. When they talk about intense moments, you can watch their gaze drift off into a 1,000-yard stare, their eyes narrow, their voice changes, and they are no longer with us in the present. They are on the battlefield. It is mesmerizing.”

Messineo told Syracuse.com he believes it’s important for the oral histories to be preserved intact as part of the National Archives rather than “wind up in somebody’s desk drawer.”

As a result of Messineo’s work, another veteran will get a special opportunity this spring. Robert McLean, a Central New York resident who is one of a handful of remaining PT boat crewmen, will attend the christening of a new workboat for the World War II Museum in New Orleans.

At the most recent show in early December, Messineo and Evans contacted the World War II Museum there to do some joint marketing. Key paid for sponsorship of a booth at the show to help the museum raise money for the workboat’s christening.

Messineo shared the interview he had done with McLean with museum staffers, who invited McLean and his family to attend the christening in late March or early April.

“This will be very special for Mr. McLean and the (museum),” says Messineo, “as there are few PT boat crewman in the country right now.”