A recent charity golf tournament with sponsorship from KeyBank raised $25,000 for the Denver Santa Claus Shop, which serves low-income children and families in the metro area. 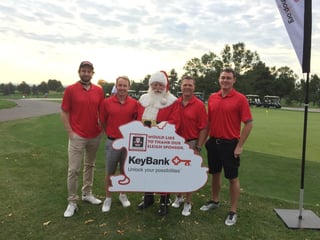 The Annual Charity Golf Tournament is the largest fundraiser for the Denver Santa Claus Shop and has had consistent sponsorship for many years by KeyBank.

"The funds raised will help the children of more than 13,000 low-income families, but it has also demonstrated our commitment to the local community, which in turn has helped to attract other corporate sponsors from throughout the Colorado area," said Richard Andersen, vice president, Specialty Finance Lending, Key Corporate Bank, and a member of the Denver Santa Claus Shop board.

"It makes me extremely proud to be represented by such a quality and supportive company as KeyBank," Andersen said.