Congratulations are in order for KeyCorp Chairman and CEO Beth Mooney, named this week as the 2017 Banker of the Year by American Banker magazine. 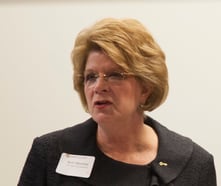 The publication, which selects a banking professional for the honor each year, chose Mooney in part for proving wrong critics of KeyCorp's 2016 acquisition of First Niagara Financial Group for $4.1 billion.

American Banker also credited Mooney's strong leadership on multiple fronts for being selected for the honor. Key Equipment Finance, one of the nation’s largest bank-held equipment finance companies, is an affiliate of KeyCorp.

"Mooney became chairman and CEO in 2011 after previously running Key's community banking unit," writes Alan Kline, in a feature article on Mooney. "In her first five years at the helm of the Cleveland company she had won praise from investors for overseeing a successful cost-cutting program, beefing up commercial banking capabilities and enhancing its consumer lending by bringing its credit card business, which it had previously outsourced, in-house.

"Having made history as the first female CEO of a top 20, U.S.-based bank, Mooney went on to earn a reputation as one of industry's most ethical and civic-minded leaders. On her watch, Key significantly increased its investments in community revitalization and developed a suite of products and services geared toward underserved consumers. These commitments have helped Key earn an outstanding Community Reinvestment Act rating from federal regulators in every year that Mooney has been CEO, as well as numerous awards for citizenship and corporate responsibility."

Learn more in the here: