Given her position as chairman and CEO of KeyCorp, Beth Mooney is at ease speaking in front of investors, analysts, regulators, employees – even 100,000-plus viewers as a guest on Jim Cramer’s Mad Money financial markets show on CNBC. 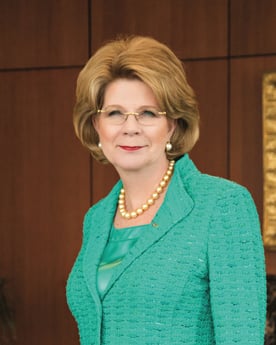 But Mooney, named “Banker of the Year” last year by American Banker, shared during a town hall meeting earlier this month at Key Equipment Finance’s headquarters in Superior, CO., that she was feeling some pressure as she prepares to be the commencement speaker next month for the Leeds School of Business at the University of Colorado Boulder. Key Equipment Finance and KeyBank are longtime supporters of the school and its diversity programs.

“It’s really humbling and petrifying to think: what do you know that could translate into a message to graduating business students that will be resonant, impactful and relevant?” she asked an auditorium packed with Key employees, as well as others on the conference line from regional offices. “Of all of the things I do, this speech has got me up at night.”

Mooney, who became the first woman CEO of a top 20 bank when she took the helm at KeyCorp in 2011, will undoubtedly add the speech to her long list of accomplishments, including being named three times as the Most Powerful Woman in Banking before last year’s ultimate recognition as Banker of the Year.

Mooney was visiting Key Equipment Finance as part of a West market tour that took her around the country to various Key regional offices.

“I really do appreciate the opportunity to come and see your progress, see the vision coming to life, and how we’re building this business,” she told Key Equipment Finance employees who packed the room. “I would be remiss if I didn’t acknowledge that in 2017 the business was up 50%. I have to pause and say, ‘thank you.’”

Key Equipment Finance President Adam D. Warner opened a question-and-answer session with Mooney by asking about the next initiative to move Key forward to become the best regional bank.

“Being the best means something,” Mooney said, “… so the aspiration to be the best regional bank is something that I think should put a spring in our step to aspire to, but know we’re starting to match it with facts, and the facts are: financial performance, and diverse and engaged employees.”

Key Equipment Finance’s employee engagement scores are 91%, with KeyCorp as a company at 87%, and very few companies nationally have those kinds of engagement scores, Mooney said. Contributing to this success is having the right business lines and a relationship-based strategy.

“First Niagara was a defining moment,” Mooney said, speaking of KeyBank’s $4.1 billion acquisition announced in the fall of 2015, which was the largest since the financial crisis. “There were lots of skeptics who didn’t believe we could do it.”

Mooney said the proof points are gathering that Key can become the best regional bank. The next leg of the journey includes leaning into the goal, believing it and focusing on organically growing the company in an efficient and effective way. To get there, her vision is for Key to be customer-centric and focused on simplicity.

“It means creating the underbelly and the infrastructure to make sure we are efficient and effective so that all of our customers and employees experience an ease of doing business with Key,” she said. “To me that is the huge frontier, and it’s a multi-year journey. It doesn’t happen overnight.”